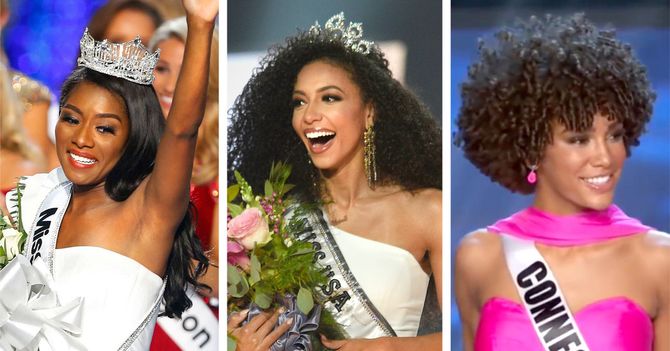 Each competition has had multiple black winners since.

The three wins have become a powerful symbol of how much American views on beauty have evolved from a past marred by racism and gender stereotypes, even as black women leaders are still severely underrepresented in other fields, like corporate America or in Congress.

“It is important to little brown and black girls to see three strong figures, three strong women, African-American women that are doing so much great work,” Ms. Franklin said on Saturday. “People will argue that race doesn’t matter. But race does matter in America, because of the history, because of slavery.”

News of the pageant wins resonated with many on Saturday, drawing words of support from the actress Halle Berry and Senator Kamala Harris, who is vying for the 2020 Democratic Party presidential nomination, among other influential figures.

“Nia, Cheslie, and Kaliegh: you are trailblazers, creating your own path on your own terms,” Ms. Harris said on Twitter.

The attention comes as the country increasingly rethinks long-held gender norms, spurred on by the #MeToo movement. Pageants have recently sought to put more emphasis on the offstage lives of the women and girls, highlighting their accomplishments and charity work, instead of only their appearances.

The Miss Universe Organization, which runs Miss USA and Miss Teen USA, began allowing transgender women to participate in 2012. Last year, the Miss America Organization announced it would end the swimsuit contest, among other changes.

It’s the racial history of pageants that the “trifecta of black winners” perhaps highlights the most, said Ashley Nkadi, a former Miss Black Ohio who has written about the pageants’ past.

“I think the image of it is very important, especially knowing where mainstream pageantry has come from,” she said.

Black women have long been underrepresented in the contests, said Elwood Watson, a professor of history and African-American studies at East Tennessee State University. For decades, they were barred from Miss America contests.

The 1968 Miss America pageant held in Atlantic City is one of the most infamous examples of that dynamic. The competition was held as a fight for civil rights raged across the country; only white women were in the pageant.

On the boardwalk outside, feminists threw bras, curling irons and false eyelashes into a trash can to condemn the scrutiny of women’s bodies by male judges.

Four blocks away, in a Ritz-Carlton hotel, another ceremony was held, crowning 19-year-old Saundra Williams as the first ever Miss Black America, in protest of the “white stereotype,” The New York Times reported.

“Miss America does not represent us because there has never been a black girl in the pageant,” she said. “With my title, I can show black women that they too are beautiful.”

There have been a number of milestones since then. As the 1970 Miss Iowa, Cheryl Browne became the first black contestant to compete in the Miss America contest. Ms. Franklin said she is the ninth black Miss America.

The 2019 winners are not strangers to racism. Ms. Franklin recalled that when she was 9, she was called a racial slur and told to go back to Africa. Ms. Kryst said she has been told that she was “pretty for a black girl.”

“Of course there are going to be parts of me that have experienced racism,” Ms. Franklin said. “It hasn’t stopped me. I have come through this Miss America system with strength and pride and grace.”

But Ms. Nkadi said more representation is needed. Pageant winners typically are not “plus-size” or do not have darker skin, she said.

Diversity in pageantry hasn’t reached many groups, said Hilary Levey Friedman, a visiting professor of education at Brown University, who has studied pageants. Ms. Friedman said Latina and Asian women have struggled to be represented.

“Increasing the diversity overall is definitely a conversation to be had,” she said.

« Previous DealBook Special: Everything You Need to Know About the Uber I.P.O.
Next » Ex-Goldman Banker Is Expected to Plead Not Guilty in 1MDB Case